THE PRESENT DAY RAMSBOTTOM ANGLING ASSOCIATION WAS FORMED FROM AN AMALGAMATION OF THREE CLUBS IN THE 1980’S. 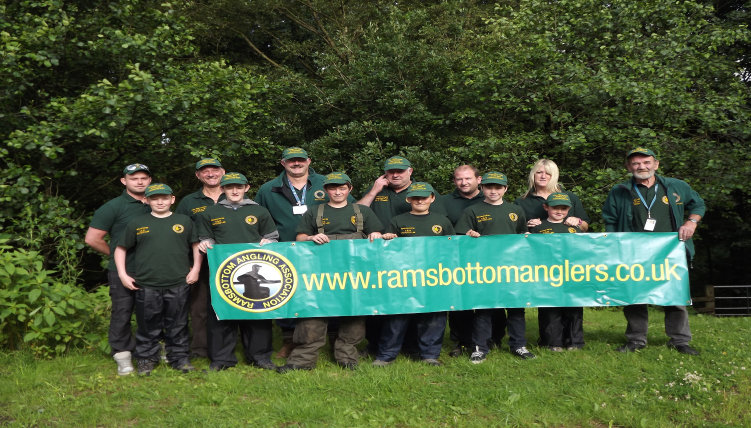 RAMSBOTTOM ANGLERS: is thought to be over 100 years old, it was based in turn village and had use of the waters in twine valley. The Secretary, Gilbert Graham, had a big influence over forming the association.

HARGREAVES ANGLERS: were a works club who had use of waters at Rose Bank Mill.

THOMAS ROBINSON ANGLERS: was formed in the 1960’s, by social club members and keen fishermen, led by the secretary Sid Petch.

They were based at the Flan, Bolton Road North, Ramsbottom. The Flan was a local name given to the Thomas Robinson Mill, which carried out the bleaching and dying of fabrics This mill along with many other mills in the Ramsbottom area had mill waters. They used the water from the local mill lodges for the industrial processes and were part of the Bradford Dyers Association.

These mill waters formed the backbone of the clubs waters. Sponsorship from the Bradford Dyers Association allowed the club to expand quickly, forming a junior section under the auspicious eye of Sid Petch. They also acquired other mill waters outside the area like Two Brooks and Riggs at Hawkshaw.

There was an active match scene for seniors and juniors. Often filling coaches, they travelled far to canals and rivers such as the Trent to participate in matches. Very often they caught just a few fish, as, there were practically no overstocked commercial waters, to interest any anglers, except trout fisheries.

There was a vibrant social club based at Ramsbottom Working Mens Club and when it closed, there was a move to our present home at Woodbank Cricket Club, Brandlesholme Road, Bury.

The club has had many secretaries/chairmen and committee members who have worked tirelessly for the club such as: Sid Petch; Frank Ashton; Jim Hilton; Graham Walsh; Les Walker; Barry Kipps; Arthur Metcalfe; Dave Rennoldson; up to the present committee who are carrying out their duties diligently. It would also be wrong not to acknowledge the considerable efforts and patience of the ladies who have stood behind these men.

At the time of the amalgamation Arthur Metcalfe was secretary. The club steered by Arthur, embarked on further expansion and water acquisition. Through his tenacity, the present home of RAA, Crown Pools was acquired from the Crown Estates and then developed into the beautiful fishery it is today. Later Clarendon Street was acquired. These are the two waters the clubs own, the rest being leased from Bury Council and other land owners.

In June 2012, the club was presented with the prestigious Clubmark award. The club regularly meets and co-operates with many other agencies, i.e: the Environment Agency, Bury Council and other land owners.

In 2014, the club made a successful application to Sport England (inspired facilities) and were able to build the base and clubroom on the Clarence Park Lido which was opened in July 2016. Since then we have developed our junior programme and continue to move the club forward.

This is a fitting tribute to the man, Sid Petch, who first had the idea of an angling club with a strong junior section over 50 yrs ago. Now the Stuart Metcalf Angling Academy is also a memorial to the previous chairman who was also totally committed to the development of young anglers.

The above information was compiled by the secretary, Neil Rright, through conversations with Stuart Metcalf, Peter Knowles and our life/honorary, member Barry Kipps. Any mistakes, omissions, misrepresentations are unintentional and will be corrected if you contact the secretary. 2018.